AK – Glimpses of the Aurora Borealis…Magic in the Sky 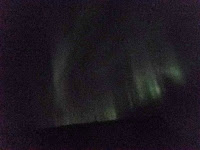 One of the main things I wanted to experience here in Alaska was seeing the northern lights.  Of course, during the summer there is bright daylight into the wee hours of the morning which is not conducive to seeing them.  So, I resigned myself to the fact that it may not happen.
As the summer progressed, suddenly during the 2nd week in August dark began to occur in the night sky.  By 11:00 PM it was actually dark outside!  By the 3rd week we could see thousands of stars above us.  The Big Dipper was directly overhead and enormous!  We were told that on a very clear night in late August and early September, the chances of seeing the lights begins to increase rapidly.  That was enough for me…I was now determined to see the magic of the Aurora Borealis before I left this state!!!
While I was waiting, I gathered some fun facts about this phenomenon.
1- Aurora is the Roman name for Goddess of Dawn
2- Borealis refers to the northern regions of the world
3- Northern Lights is a rough translation
4- The sun emits ion plasma clouds  (high energy particles/solar flares)
5- They reach the edges of the Earth’s magnetic field and some particles get trapped within
6- They collide with gases high above the Earth’s surface which produces the coloration we see
7- The many colors are red, blue, violet and green depending on the types and quantity of gases
The Geophysical Institute has a website that gives the activity level of the lights, so every time it was at least a 4 of 9, Carl and I would look out for them.  Of course, there is no way to really know what time the show will occur.  Several times, we missed them because we were too early or too late…BUMMER!  So, Sherry said she would text or call whenever she saw them out even if it was in the middle of the night!
Well, lo and behold…at 1:41 AM the morning of August 31st…my cell phone rang and it was her.  We never got up so fast in our lives…LOL
Outside in the night sky was a band of white-ish light stretching from one horizon to the other . It was an Aurora rainbow!  I know my heart must have skipped a couple beats!  For nearly an hour, we stood and watched as it widened and narrowed right before our eyes.  Just when we thought that was it (it was getting pretty chilly) and had decided to go in…one half of the sky began to dance with lights of white and green mostly with a tinge of violet.  They appeared and disappeared.  The bands of light were vertical and then horizontal, changing shapes.  They swelled and shrunk!  Then waves of light literally danced across the sky right in front of us!  I almost cried at the sight of such a magical vision.  We were both so very grateful in those moments to have witnessed the event.  We both took pictures, but it seemed that nothing but black turned out.  Then I uploaded them onto my PC anyway and, in edit mode, I hit the ‘auto adjust’ button and some color began to appear!!!  These photos do not do the real thing justice, BUT I am hoping that if you look carefully and maybe tilt your screen a little that you will be able to get at least a glimpse of the spectacle that was in the Alaska sky that night!
The last 4 are the best…when she really started having fun….and the others show a vertical shoot. 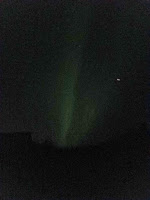