I was shocked at the sheer size of this ship…the USS Alabama.  My reaction to it was similar to the first time  I stood next to a cruise ship.  It’s incomprehensible unless you experience it in person. This battleship was commissioned November 1, 1941.  It’s a little over 680 feet long and is registered at 35,000 tons!!!  Under battle conditions…45,000 tons (90 million pounds).  During WWII, she earned 9 Battle Stars and shot down 22 enemy planes.
The tour was extensive.  There were rooms for every possible physical need from eating to having your uniform pressed, but I wondered how the crew of 2,500 managed to keep their spirits up.  As I walked through the ship for over 2 hours, seeing nothing but thick steel…cold to the touch, bland to the eyes and empty to the soul…I gained a level of respect and compassion for men of war that I’m not sure I really had before.  There were also 129 guns of various sizes aboard the battleship. I suppose silence was the sound most treasured during the many months at sea.  Thanks to all those who served on the USS Alabama as well as in any other capacity during World War II. 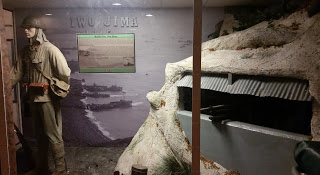