After all the brake drama, we decided we needed to stay in a nice RV Park for a few days.  Not many were open yet, but we did find one and WOW what a nice surprise it was.  Never before had either of us seen an RV Resort of any kind!  It was like a city!  Paved roads, street light, street signs and names, hedges, adult recreation area with salt pool hot tub, sauna and community room!  It was amazing.  It was called Holiday Park! 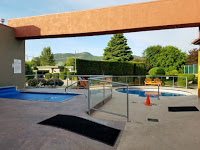 One day we were just taking a walk through the property and ran into a maintenance man that told us about a kangaroo farm not far from the park!  You KNOW it wasn’t long before we were on our way with cameras in hand…LOL  The rescue/petting farm was only 2 miles down the road and what a wonderful place!!!  Kangaroo Creek Farm…

There were emus, goats, fancy chickens, ducks, capybaras (largest rodent in the world), cockatoos, peacocks, potbelly pigs adult and baby wallabies, kangaroos and wallaroos…the joeys were between 2 and 4 weeks old!!!!!  They were so soft and warm and sweet…neither one of us wanted to give them back after holding them!

One of the cockatoos that was placed on Carl’s shoulder kept saying, “Huh?”  Must have been a relative of his…LOL  Carl made a new friend in the adult kangaroo named “Big Red”.  It was laying under a wagon to keep out of the sun and when Carl stooped down to rub its back, after a few minutes it rolled over so Carl could get the other side!!!  It was a riot.  A few people standing around cracked up laughing. 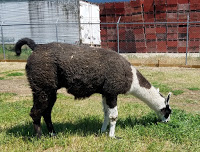 One of the funniest things we saw was when the woman who worked there came to get the young wallabees to put inside for the night…she reached down and grabbed it by the tail and stuffed it into a large sack to carry it up front!  They spend the nights indoors because their skin is still kind of thin and if the older ones decided to ‘play’ with them unsupervised, they may get hurt.