Rita and I were up and making fresh fruit salad by the time the guys surfaced!  They were up to all hours discussing…possibly…everything they had in common and then some.  After an amazing breakfast, thanks to Rita, we got ready to hit the town.  First, Parque Calderon, then on to do some serious souvenir shopping…alpaca, leather, wall hangings, shoes, etc.  It was great to walk along and stop to buy fresh foods from local vendors.  At one point, with tremendous enthusiasm, we took a break from strolling the streets for scrumptious ice cream delights.  (Pictures speak louder than words…see photos below…Yum!)  It was one of our more amusing experiences with the language barrier…lol.

Then Henry took us up to Mirador de Turi for a breathtaking panoramic view of the city of  Cuenca…it was gorgeous!   We went back to the house for dinner and a movie.  An early bedtime followed. We had to get on the road early in the morning.
Bright and early, Rita and I took on the monumental task of stuffing all the souvenirs into this one duffel bag.  Go, us!!!  Success!  In the meantime, Henry and Bud mapped out a route that was supposed to save us a lot of time and potential aggravation by bypassing Guayaquil (the beating commercial heart of Ecuador!).  The best of intentions…lol…we got terribly lost and ended up having to go through the whole darn city anyway…part of the adventure!
After our gourmet breakfast of oatmeal with ALL the trimmings, we hustled to get on the road.  Rita and Henry prepared lunches for us (leftover fillet mignon…YES!)  It was such an emotional mixed bag for me as we drove off.  I was filled with gratitude for having had the opportunity to be with my dear friends, have them meet a new friend of mine, and for the adventure that was still ahead of me in Ecuador…however, I was wishing that we had more time to spend with Rita and Henry in Cuenca!  Perhaps I will return someday! 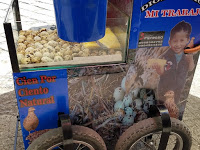